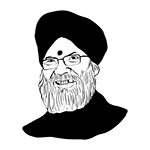 Despite a slew of serious cases against him, including criminal intimidation, robbery, dacoity, murder, forgery, cheating and criminal breach of trust, in addition to twice being accused of rape, Swami Sachidanand Hari, popularly known as Sakshi Maharaj, is up for re-election from Unnao. This election season, he has been in news for making controversial statements. He said that there won’t be any elections in 2024 and also said he would curse people who did not vote for him.

Hari is very popular among his disciples and runs a network of ashrams and schools in UP. He is up against SP-BSP alliance candidate Arun Shankar Shukla, also known as Anna Maharaj, and Congress candidate Annu Tandon.