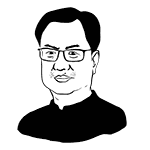 The Union Minister of State for Home is set for a tough contest on his home turf — Arunachal West. He will take on Congress candidate Nabam Tuki, a former chief minister, and the National People's Party's Khyoda Apik. The Citizenship (Amendment) Bill that has sparked protests across the North East could end up hurting BJP and Rijiju. The Union Minister, however, is unfazed and has repeatedly maintained that the controversial Bill, which will grant Indian citizenship to Hindus, Sikhs, Buddhists, Jains, Parsis and Christians, who fled religious persecution from Pakistan, Afghanistan and Bangladesh, won’t affect the identity of the North East. In the past two years, BJP has made considerable gains in the region that used to be a Congress bastion. The Lok Sabha elections could be a marker for where the region stands when BJP has committed itself to the legislation.