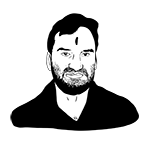 By backing prominent Jat leader and Khinvser MLA Hanuman Beniwal, BJP is hoping to attract Jat votes in the Rajasthan. Earlier this month, BJP and Beniwal's Rashtriya Loktantrik Party announced an alliance in the state and fielded Beniwal from Nagaur.

Beniwal, who had floated RLP ahead of 2018 Assembly elections, is popular among Jat youth because of his aggressive leadership. The RLP leader is up against Congress' Jyoti Mirdha, a former MP from the same seat. Despite Beniwal's aggressive pitch, Nagaur remains tilted in Mirdha's favour as Congress has five sitting MLAs out of total eight Assembly constituencies in Nagaur Lok Sabha seat.