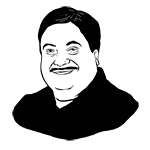 The Union Minister for Road, Transport and Highways is BJP’s candidate from Nagpur. Gadkari faces BJP rebel Nana Patole, who has been fielded by the Congress. An RSS loyal, Gadkari enjoys massive support in Nagpur that houses RSS headquarters. A former BJP president, Gadkari, known for his affable demeanor and friendly relations weth all parties, is also believed by some to be RSS’s plan B for Prime Ministerial post in the case BJP fails to get an absolute majority. He had won the Nagpur seat by a margin of 2,85,000 votes in 2014, but Patole has been drawing large crowds in his rallies in the area. Gadkari might face a harder road to victory this time.