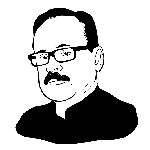 Sitting MP from Bihar's Katihar, Tariq Anwar has been fielded by Congress from the same seat and will be contesting against former MLA Dulal Chand Goswami of JD(U) and NCP candidate Muhammad Shakur, also a former MLA. Anwar is also a member of Rajya Sabha representing Maharashtra. He has won the Katihar in the Lok Sabha five times before. He started his career as a journalist and later became the editor-in-chief of 'Rashtrawadi Sankalp,' which is a weekly newspaper in Hindi published from New Delhi since 2001, and now from Mumbai. His revolt against Sonia Gandhi in 1999 because of her foreign origin brought a major twist in his political career.