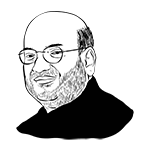 Bhartiya Janata Party (BJP) President Amit Shah will be contesting from the much-talked-about Gandhinagar Parliamentary constituency in Gujarat eyeing a debut to the Lok Sabha from the saffron bastion. The seat is currently represented by BJP veteran and former deputy Prime Minister Lal Krishna Advani, who had won for five consecutive terms from 1998 to 2014. The Congress has fielded its MLA CJ Chavda from the seat. Shah shares with a two decade long association with Advani formulating electoral strategy for him till the 2009. He was also the election in-charge of former Prime Minister Atal Bihari Vajpayee when he contested from Gandhinagar.