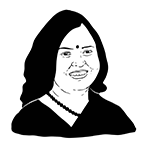 Meenakshi Lekhi, the incumbent MP from New Delhi seat, is confident of her win come May 23. According to her, AAP and Congress and competing among themselves and pose no threat to the BJP.

But Congress' Ajay Maken is hoping for a comeback after the poor showing of 2014; Maken, a two-time MP from the seat had finished third in 2014. AAP's Brijesh Goyal, a political debutant, is also likely to garner a section of votes. If the non-BJP voter is split between Maken and Goyal, Lekhi would have the clear advantage in the seat.