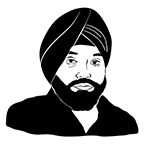 Arvinder Singh Lovely is in a triangular contest in East Delhi, one of the most watched seats this election, against AAP's popular leader Atishi and BJP's star recruit Gautam Gambhir.

Both Aishi and Gambhir are heavyweights, but Lovely is an experienced Legislator from Gandhi Nagar Assembly seat in East Delhi and has a good grasp on the local issues. In 2014 Lok Sabha polls, BJP's Maheish Giri had won from East Delhi, while AAP and Congress had finished second and third respectively.

Lovely is hoping to get Sikh votes in areas such as Trilokpuri, Nizamuddin and Okhla and has also urged Muslims, who have traditionally voted for Congress, to not vote for AAP.