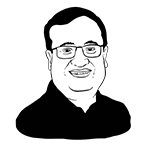 Ajay Maken is contesting from the New Delhi seat, his former stomping ground, and is up against BJP's incumbent MP Meenakshi Lekhi and AAP's Brijesh Goyal.

Maken had won from the seat in 2004 and 2009, but finished third in 2014. While the AAP candidate is pitching for full statehood for Delhi, Maken has said the national capital would become as bad as ‘UP and Bihar' if granted full statehood.

A big issue in the constituency is sealing of commercial establishments which has angered traders. Maken has said the central government and AAP government in Delhi failed to prevent sealing, while Lekhi has said Maken's "shoddy" work as Union urban development minister was responsible for responsible for the sealing.