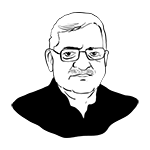 Amid the buzz around Kanhaiya Kumar and the controversial remarks of Giriraj Singh, the Gathbandhan candidate in Begusarai, Tanvir Hassan, is often ignored. But Hassan’s introduction has made Begusarai and triangular contest and a ‘hot seat’ this election.

Despite a Modi wave in 2014, Hassan came in second in Begusarai and had a vote share of 34.31 per cent; BJP’s winning candidate Bhola Singh had a marginally higher vote share of 35.72 per cent. Additionally, Bhumihaar votes splitting between Kanhaiya and Giriraj could hand Hassan the advantage.