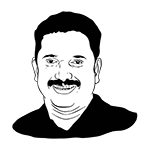 Bharatiya Janata Party had decided to field K Surendran, one of the several Kerala general secretaries, as their candidate in the Pathanamthitta constituency, where the Sabarimala temple is located. Surendran, a leader known for his firebrand speeches, was a champion of the street agitations to deny entry for menstruating age women in Sabarimala, despite a Supreme Court order, which led to clashes and his arrest. For the party that has never won a Lok Sabha seat in Kerala, the fights to deny temple entry for women in Sabarimala was supposed to be, in the words of BJP Kerala president Sreedharan Pillai, "a golden chance" in the 2019 parliamentary contest in Kerala.